How is it that the branch office of a group a US court found participated in funding terror isn't linked to terror?

The National Council of Canadian Muslims (NCCM) is the Canadian branch office of the Council of American-Islamic Relations, a group was an unindicted co-conspirator in the Holy Land Terror financing trial, that secured multiple convictions.

NCCM is threatening to sue Prime Minister Stephen Harper and his spokesman Jason MacDonald for libel when the latter referred to them with: "We will not take seriously criticism from an organization with documented ties to a terrorist organization such as Hamas."

As noted in Robert Sibley's blog at Ottawa Citizen: "In 2010, U.S. District Court Judge Jorge A. Solis ruled that there was “ample evidence”: that CAIR participated in a “criminal conspiracy” led by the Holy Land Foundation, which was Hamas’s key fundraising agency in the United States."

So perhaps someone could explain how that is not a link to the terrorist group Hamas, because to me the link seems rather obvious.

Formerly known as the Council on American-Islamic Relations - Canada (CAIR-CAN), as of today, the NCCM still redirects visitors to its website back to its old CAIR-CAN site. CAIR-CAN leaders have denied an operational link between it and the US home office. But as Sibley recounts from research done by the Quebec-based blog Point de Bascule:


In 2003, (former CAIR-CAN leader Sheema) Khan swore an affidavit for the Ontario Supreme Court in connection with a trademark dispute. In the affidavit Khan, (former CSIS Straegic Planning Head David) Harris testified, “states categorically that CAIR-CAN is under the direction and control of the American CAIR organization.” Moreover, Khan, while a senior official of CAIR-CAN, also served on the board of CAIR.

Furthermore, one of CAIR-CAN's long-serving Board members was the notorious Jamal Badawi, who as of today is still listed as a Board member on the CAIR-CAN website.  An Egyptian-born Muslim cleric and former professor at St. Mary's University in Halifax, Badawi was listed on The Muslim Brotherhood's shura council in a document entered as evidence in the Holy Land Terror Trial.  Badawi has endorsed suicide bombings and according to investigative journalist Patrick Poole, "was a featured speaker at a conference in Qatar honoring Muslim Brotherhood spiritual leader Yousef al-Qaradawi, where Badawi shared the speaker’s podium with Khaled Mishaal, the head of Hamas and a designated terrorist by both the U.S. and Canada."

Poole also reports that Badawi "sits on the board of directors of Qaradawi’s International Association of Muslim Scholars (IAMS), which just a few months after its founding in 2004 issued a fatwa authorizing the killing of American troops in Iraq."

The NCCM and its media cheering-section like The Toronto Star are trotting out supporters for the Muslim group including virtually unknown organizations like The Canadian Association of Jews and Muslims (CAJM). The idea of friendship between religious groups is as laudable as the idea that Jews and Muslims in Canada should be divided over government foreign policy is tragic. However there is a certain type of ostrich-like idiocy that certain self-described progressives will engage in so that they can deny some harsh realities, and CAJM's co-chair Barbara Landau is part of that sad strain.

In 2012, Landau was a judge at the North American Muslim Foundation's speech competition on the topic of  "anti-Semitism and Islamophobia." One observer, Sarah Margles, a member of a "progressive" synagogue that participated as observers of the contest, reported on a blog post that she has since deleted (but was recorded by the blog Sassy Wire):


"Almost all the speeches were misguided about anti-Semitism. Most of them said it was something that happened in the Holocaust but has ended. The most egregious speech quoted the Protocols of the Elders of Zion as if it were true. Many talked about Jewish money and power." 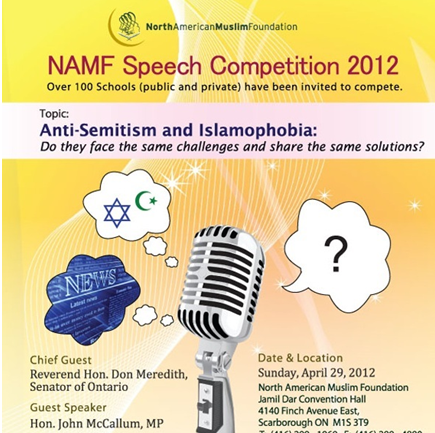 Despite two attempts to reach her for comment following exposure of the incident, Landau would not respond to discuss the matter with me.

In certain quarters of Islamist communities, anti-Semitism is so ingrained that even when professing to oppose it, they invoke anti-Semitc canards. The response of people who have been programmed to think they are "progressive" is to negate of deny that any group that claims to be "oppressed" can commit a wrong. Instead, like bizarre groups like "Queers Against Israeli Apartheid" which makes common cause with Islamists who would happily see them stoned to death because of their sexual orientation, "progressive" Jews frequently serve as enablers to extremists who have cheered on those who would commit a genocide against Jews in Israel.

Canadians who detest Stephen Harper, both in politics and the media,  who boast about being "progressive" will leap upon any excuse to demonize the Prime Minister and his government.  Many, without knowing any of the details of the NCCM's background, have instinctively sided with the Muslim group in hope the matter will embarrass Stephen Harper. What is more likely is that people siding with NCCM will embarrass themselves.

In March, the NCCM is having a $200-a-seat fundraiser featuring the American-Iranian writer Reza Aslan.  Only a few days ago, Aslan insinuated the beautiful Hollywood movie star Scarlett Johansson was the equivalent of a Nazi supporter for being the spokesperson for the Israeli soft drink maker SodaStream.

Anyone who thinks that aligning themselves with a the local branch of a co-conspirator in Hamas terror-funding and people who promote extremist, bigoted hate and invective could find that the backfire taints them for a very long time.
Posted by Richard K at 12:49 PM

It is possible that the Canadian branch has nothing to do with the American branch, I have no idea about that. That is the case with the JDL which has been involved with terrorism in the US but that has no connection to the JDL Canada at all.

Haven't you ever heard of taqiyya and kitman?

I don't know if there's a leader of the Canadian JDL who swore out an affidavit that they were under the control of the US branch, like a CAIR-Can chair did about her organization's relationship with CAIR

I wasn't aware of the affidavit, so clearly they are affiliated. Their law suit should be interesting.

It`s mentioned in the post above and has a direct link to a copy of the affidavit. You can check out the affidavit here too:

Well, there are only so many hours in a day...