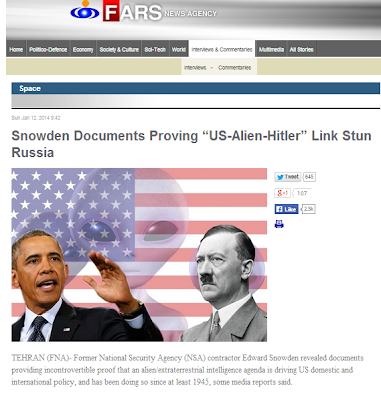 Relying on a posting at a website run by a conspiracy nut, Iran's semi-official FARS News Agency is asserting that the US government is controlled by extraterrestrial aliens. Part of the "proof" of the alien conspiracy cited are documents provided by NSA whistleblower Edward Snowden and statements from a former senior Canadian Cabinet Minister in the Trudeau government, Paul Hellyer.

Long suspected of 'not being all there,' the 90 year-old Hellyer has been making bizarre claims about 'aliens walking among us' for some time, recently doing so on Russia's English-language propaganda network, Russia Today.

According to Iran's Fars News:


A stunning Federal Security Services (FSB) report on the nearly two million highly classified top-secret documents obtained from the United States Department of Defense (DOD) run National Security Agency-Central Security Service (NSA/CSS) by the American ex-patriot Edward Snowden states that this information is providing “incontrovertible proof” that an “alien/extraterrestrial intelligence agenda” is driving US domestic and international policy, and has been doing so since at least 1945...

...Of the many explosive revelations in this FSB report, the one most concerning to Russian authorities are the Snowden’s documents “confirming” that the “Tall Whites” (further revealed by Defense Minister Hellyer as noted above) are the same extraterrestrial alien race behind the stunning rise of Nazi Germany during the 1930’s.

After studying thirty years of studying American politics, along with their economic and foreign policies, I wish the assertion that the country was run by aliens was easier to laugh off.