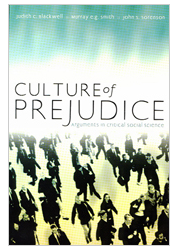 A trio of Brock University blowhards, Marxist professor Murray Smith, the late Judith Blackwell, a Women's Studies professor who died in 2005 at the age of 61 from cancer, and John Sorenson, who teaches Critical Animal Studies (yes, you read that right) authored a textbook which is currently in use at The University of Calgary's Sociology Department that offers a morally relativistic approach to Osama bin Laden's terror campaign.

Published by The University of Toronto Press, Culture of Prejudice: Arguments in Critical Social Science is not only anti-Western, but is tinged with anti-Semitism and filled with blatant falsehoods:


One thing leads to another. Osama bin Laden and his al Qaeda terrorist organization presented three conditions for ending their “holy war” against the United States both before and after the events of September 11, 2001: first, that Israel retreat from the territories that it occupied in 1967 and that an autonomous Palestinian state be recognized; second, that the trade sanctions imposed upon Iraq that have cost the lives of over one and a half million people, most of them children, over the last decade be lifted; and third, that United States military bases established in Saudi Arabia during the Persian Gulf War of 1991 be closed. An overwhelming majority of humankind would likely sympathize with these demands, even as they would condemn bin Laden's methods and reject his program of establishing repressive, fundamentalist theocratic states throughout the “Islamic world.” At the same time, most inhabitants of the Third World-and a great many people elsewhere-would consider the terrorist methods of al Qaeda no more “evil” (to use President George W. Bush's favoured term) than the methods employed by the US and other major powers in maintaining a global order that serves the interests of huge transnational corporations while perpetuating the grinding poverty of billions of people.

Bin Laden's "Letter to America" and his demands are a litany of hysteria but did not include that Israel withdraw to its 1967 lines but implies that it should not exist and the land should belong to "the Muslims."

The textbook also promulgates a number of falsehoods about the Israeli-Palestinian conflict designed to instil its readers with a heavy bias against Israel, stating in another section:


...More recently, supernatural sanctions have been invoked by Israelis who violently dispossessed the population of Palestine. As Israel came to be defined as a Jewish state, promised to them long ago by a supernatural being, most of the Palestinian population was expelled; approximately 4.5 million still live there as refugees. Millions of Palestinians remain under military occupation, under constant surveillance and regular attack by Israeli forces, including tanks, fighter planes, and helicopter gunships. Their houses and land have been destroyed or expropriated and given to hundreds of thousands of armed settlers.

Thus the textbook characterizes Israeli-Arab citizens as "refugees" a status that even the ridiculous definition in use by the vociferously anti-Israel UN Relief and Work Agency for Palestine would not encapsulate. Beyond that, the grossly inflated number exceeds the total number of Palestinians in The West Bank and Gaza combined, most of whom are not considered refugees.

More of the ideologically inspired nonsense in Culture of Prejudice: Arguments in Critical Social Science is discussed and refuted at the blog Elder of Ziyon.

The use of this textbook discredits any program and university employing it. Whether the University of Calgary's Sociology Department continues to use it will be an indicator of the credibility of the program and its graduates.  Unfortunately, as is evidenced by a disgraceful 2009 incident at the University of Toronto's Social Work Department, instigated by a professor there, it seems academic Social Sciences have too often become politicized arenas for under-qualified polemicists.
Posted by Richard K at 11:31 PM