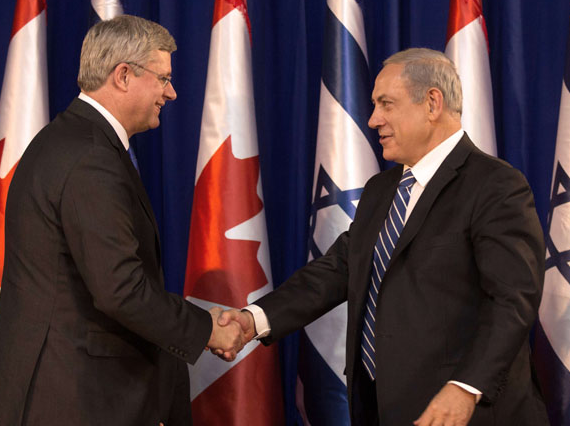 Distortion and misinformation has been the aftermath of the speech Canadian Prime Minister Stephen Harper made to Israel`s national legislature on Monday.

The Prime Minister clearly said in his speech that not all criticism of Israel is anti-Semitism. But that hasn`t stopped politically-motivated pundits including Liberal Party hack Warren Kinsella, or sloppy journalism from the likes of Sun News` David Akin, from portraying the exact opposite of what the Prime Minister said, such as Akin`s dishonest assertion that  "in Harper's formulation, you're an anti-Semite if you criticize Israel."

In both the case of Kinsella and Akin the charge against Harper is probably an attention-getting device, since both writers, Akin elsewhere in his same column, and Kinsella in an earlier blog post, acknowledge that Harper said no such thing.

What Harper did describe as anti-Semitism is:


“As once Jewish businesses were boycotted, some civil-society leaders today call for a boycott of Israel. On some campuses, intellectualized arguments against Israeli policies thinly mask the underlying realities, such as the shunning of Israeli academics and the harassment of Jewish students.

Most disgracefully of all, some openly call Israel an apartheid state.

Think about the twisted logic and outright malice behind that: a state, based on freedom, democracy and the rule of law, that was founded so Jews can flourish, as Jews, and seek shelter from the shadow of the worst racist experiment in history, that is condemned, and that condemnation is masked in the language of anti-racism.

It is nothing short of sickening.

But this is the face of the new anti-Semitism.

It targets the Jewish people by targeting Israel and attempts to make  the old bigotry acceptable for a new generation.

Of course, criticism of Israeli government policy is not in and of itself necessarily anti-semitic.

But what else can we call criticism that selectively condemns only the Jewish state and effectively denies its right to defend itself while systematically ignoring – or excusing – the violence and oppression all around it?"


As Federal Cabinet Minister Jason Kenney noted in rebutting Akin, the definition of anti-Semitism used by Harper is nothing new and reflects the definitions in use by the European Union.

However, what is novel is that a Canadian Prime Minister has never been so explicit in stating that outlook before.

This has significant ramifications back in Canada for a number of anti-Israel fanatics who have tried to excuse their anti-Semitism as anti-Zionism.

The fact that a person may be a Jew does not mean that they can't be a Jew-hater. One example is the group of radical cretins calling themselves Independent Jewish Voices that was founded, by the admission of its own leaders, for the primary purpose of putting useful idiot Jews (some of whom who only pretend to be Jewish)  in front of the anti-Israel movement so they could deflect charges of anti-Semitism.

It is now clear that, in the view of the Canadian government, people such as labour leaders Sid Ryan are anti-Semites and that the unions CUPE Ontario and the Canadian Union of Postal Workers are anti-Semitic organizations. A federal court recently agreed with Mr. Kenney in his assertion that Muslim groups like The Canadian Arab Federation are (or at least appear) anti-Semitic, and that description would easily apply to a number of other Canadian Islamic organizations, including the Canadian Association of Shiite Muslims (CASMO) and Zafar Bangash's Islamic Society of York Region.

The label of anti-Semite would therefore extend to Jew-hating Jews like Naomi Klein, her obtuse husband Avi Lewis, and Judy Rebick. The website rabble.ca, which billed itself as "the official media sponsor" of Israeli Apartheid Week would be, by definition, a hate-site. The site is currently published by the spouse of NDP Deputy Leader Libby Davies, who herself has often been accused of being anti-Semitic.

What will be more controversial is that now, in the very explicit view of Canada's government, Israeli Apartheid Weeks on campuses are in the view of Canada's government, anti-Semitic and by extension, university's permitting them are sanctioning Jew-hate. There are also a number of university supported student groups, including the Ontario Public Interest Research Group,  that are so defined as anti-Semitic. Universities will have to take a very close look to decide if they can continue to sanction these hate groups on their campuses.

As far as university funding goes, it's interesting to note that The University of Toronto's scandal-plagued, Marxist-leaning Ontario Institute of Studies in Education has appointed someone who fits the government's description of an anti-Semite by the name of Abigail Bakan, as the head of its Humanities, Social Sciences and Social Justice Education department.

In the case of the City of Toronto, the collection of vapid freaks calling themselves Queers Against Israeli Apartheid now cannot make any sort of claim, at least from the official perspective of Canada's government, that they are not an anti-Semitic group. By Toronto's funding the World Pride Festival in 2014 that includes this group, the city is de facto funding Jew hate, and a re-examination of that funding may be necessary.

The ramifications of Mr. Harper's very impressive and unambiguous speech are far-reaching indeed, and they have some of Canada's most discreditable people very worried.

And anything that has such people upset, whatever else its merits may or may not be, can't be all bad.
Posted by Richard K at 2:49 PM

Well written. Thank you for clarifying what the MSM will not.

You only have to look at Karl Marx.

While Jewish by birth, his father was not a practising Jew and Karl who rejected Judaism created a whole new set of false excuses to hate Jews when he wrote `On The Jewish Question' in 1843.

These are not self-hating Jews as some label them, but those who have not just rejected Judaism but gone beyond that to abject antisemitism.