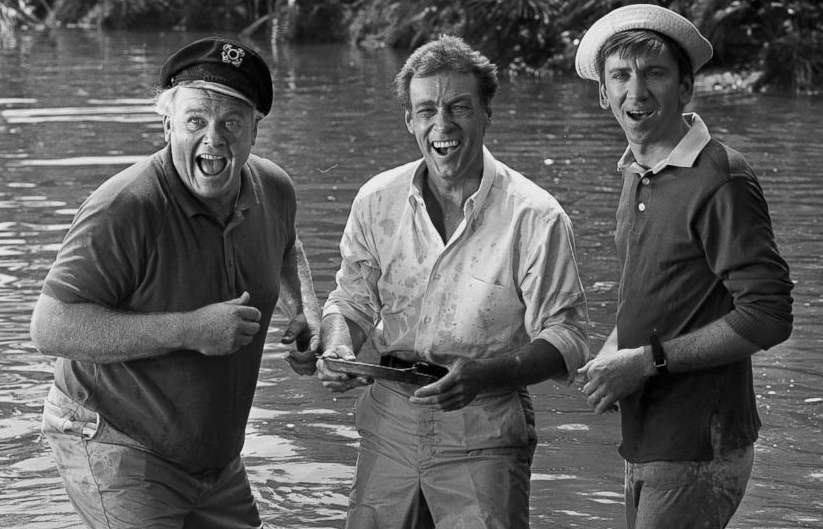 Russell Johnson, who played The Professor on Gilligan's Island, died yesterday at the age of 89.

From The New York Times:


The Professor was a good-looking but nerdy academic, an exaggerated stereotype of the man of capacious intelligence with little or no social awareness. Occasionally approached romantically by Ginger (and guest stars, including Zsa Zsa Gabor), he remained chaste and unaffected.
But he was pretty much the only character on the show who possessed anything resembling actual knowledge, and he was forever inventing methods to increase the castaways’ chance of rescue. Still, among the show’s many lapses of logic was the fact — often noted by Mr. Johnson in interviews — that although the Professor could build a shortwave radio out of a coconut shell, he couldn’t figure out how to patch a hole in a boat hull.
Avid fans — very avid — are probably the only ones to remember that the character’s name was actually Dr. Roy Hinkley

Amid the many obituaries, there seems to be little mention of his heroic record as a pilot in the Pacific Theater in World War 2, so this information from wikipedia is worth repreating:


After high school, in the midst of World War II, Johnson joined the United States Army Air Forces as an aviation cadet and was commissioned as a second lieutenant. He flew 44 combat missions as a bombardier in B-25 Mitchell twin-engine medium bombers. While flying as a navigator in a B-25 with the 100th Bombardment Squadron, 42nd Bombardment Group, 13th Air Force, his plane and two other B-25s were shot down in the Philippines in March 1945 during a low level bombing and strafing run against Japanese targets. The planes were hit by intense flak and had to ditch in the waters off the port of Zamboanga. During the ditching, he broke both his ankles and the radioman next to him was killed. Johnson earned a Purple Heart for this mission. He was also awarded the Air Medal, the Asiatic-Pacific Campaign Medal with three service stars, the Philippine Liberation Ribbon with one service star, and the World War II Victory Medal. He was honorably discharged with the rank of first lieutenant on November 22, 1945. He then joined the Army Reserve and used the GI Bill to fund his acting studies at the Actors Lab in Hollywood.