The Canadian Arab Federation has issued a press release calling for the Canadian Human Rights Museum to ensure "the plight of the Palestinian people is represented in the museum in an equitable manner."

Palestinians are subject to tyranny by groups such as Hamas which persecutes Gays and religious minorities, represses women and denies them equal rights, uses civilians as human shields, tortures prisoners, conditions their own children to become murderers, and tricks gullible youth into killing themselves and innocent Israeli children with the absurd promise of sex in the afterlife.

It is encouraging to see a group Federal Citizenship and Immigration Minister Jason Kenney identified as racist and anti-Semitic coming around to condemning Palestinian terrorism that has cursed their own people to years of suffering and war.

That has to be what they meant, right? 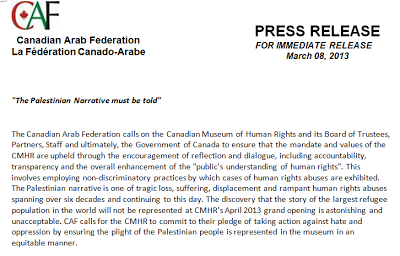 I say we give them what they must want. Let's start with Hamas reenacting the Salem Witch trials!

How about representing Christians in Pakistan lol

Or how about what is probably the largest oppressed group in the middle east, women. Specifically those in Saudi Arabia. A country that makes Iran look liberal. The treatment of women in Saudi Arabia is beyond appalling. If this Canadian Arab Federation is so concerned about human rights they should start with Saudi Arabia.