Using a serial rapist as a role model for kids? Thanks again Toronto District School Board!

One of the TDSB's role models they extol for Black History Month is serial rapist Eldridge Cleaver.

In his 1968 collection of essays titles Soul on Ice, the former Black Panther leader wrote:

"Rape was an insurrectionary act. It delighted me that I was defying and trampling upon the white man’s law, upon his system of values, and that I was defiling his women – and this point, I believe, was the most satisfying to me because I was very resentful over the historical fact of how the white man has used the black woman. I felt I was getting revenge.

I started out practicing on black girls in the ghetto where dark and vicious deeds appear not as aberrations or deviations from the norm, but as part of the sufficiency of the Evil of a day. When I considered myself smooth enough, I crossed the tracks and sought out white prey. I did this consciously, deliberately, willfully, methodically."

Interestingly, later in life, Cleaver renounced his past and became a conservative Republican. Naturally, the ideological nitwits at the TDSB omitted that from his biographical notes.

Though there are many incredible role models for Black History Month who are Republicans or conservatives, the fanatics who run the Toronto District School Board don't want children "of color" to grow up to admire anyone who doesn't embrace identity politics and entitlements.

Among the conspicuous omissions from the TDSB's list of role models are the brilliant authors and philosophers Shelby Steele and Thomas Sowell, the military hero and former Congressman Allen West, and Former US Secretaries of State during George W. Bush's Presidency, Colin Powell and Condoleeza Rice.

Making the list, aside from the rapist Cleaver, was anti-Semitic author Alice Walker and Liberal patronage appointee Anne Cools. 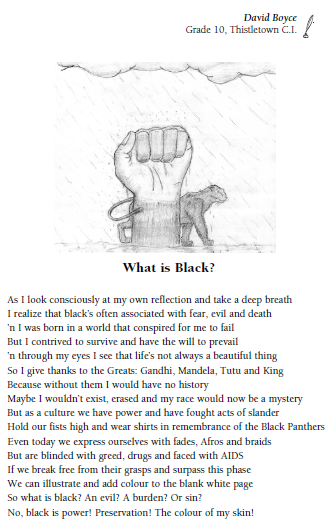 UPDATE: And as one could predict, the TDSB's indoctrination has produced children who are praising a gang of racist, murdering rapists and drug-dealers. Identity politics at its worst. Keep up the great job, Toronto District School Board!