There's a difference between an Education expert and an Evolutionary Biologist. The latter requires facts and evidence and the former frequently will make up nonsense and try to indoctrinate children to it based on their ideological desires.

There is no moral judgement in that. Gays should be entitled to equal rights, be free from all forms of discrimination and Gay marriage can actually be beneficial for society.

But it's a far cry from that to saying homosexuality, something that occurs in about 2% of the population, is 'normal' or that gender is something that can be a choice.

These ideas are part of the idiocy fostered in places like the Ontario Institute for Studies in Education where some programs are comprised of majority Gay students and staff, and by their willing accomplices at Ontario's Ministry of Education and by the ridiculous leadership of the Toronto District School Board (TDSB).

Among the latest absurd attempts at social engineering, the TDSB wants to encourage cross-dressing in children as young as pre-school. 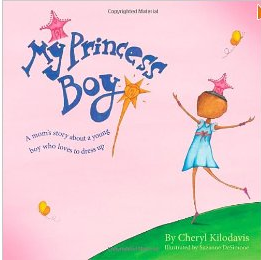 Among the books recommended to kids in pre-school to Grade 3 by the TDSB's Positive Spaces Resources is a book called My Princess Boy, the protagonist of which is a young boy who wears dresses and a tiara.

Evidently being Gay-positive isn't enough for the TDSB, it now wants, at the youngest age, to encourage boys to be flaming queens.

In a system where most children can't name all Canada's provinces and provincial capitals, it's heartening to know that they spend so much time emphasising  `gender choices.``

It`s hardly any wonder that so many university professors are noticing that students entering post-secondary studies don`t even know how to properly punctuate a sentence.

But at least Toronto`s public schools are giving them a head-start on learning how to accessorize.

Reading through the article, if sex can be a choice, then why not sexuality?

By 'sex' I assume you mean gender and yes, that would be the logical extrapolation.

And that in essence is what the TDSB is teaching, which is ironic because for years Gay Rights activists were (and as far as I know, most still are) saying that homosexuality is not a choice but is biologically predetermined. Science backs that up.

But now the Gender Studies idiots are taking the same position as religious fundamentalists who say these things are choices.

There is no scientific consensus for either the cause of or reason for homosexuality (or homosexual behaviour) occurring in either humans or other species on earth. Population control is an intriguing theory, but is just that
; a theory. I share your opinion that gays should not face discrimination and should have equal rights, but your contention that nature's purpose for homosexuality has been explained is wrong.

There has been a lot of discussion about this issue lately. I think it is a dangerous precedent to make such drastic alterations to the way we were born. What happens when a teenage girl decides she wants bigger breasts and wants plastic surgery? How would this be any different?

Also, it is a little known fact that in Iran sex change procedures are covered by the government. It is part of their strategy to eradicate homosexuality. Basically if you are a homosexual in Iran you have three choices: Change your gender, stop being homosexual or be executed.

It's no wonder Islam is becoming so popular around the world.

OISE should set up a branch office in Tehran.

i'm going to have to disagree with your population control theory.

You're at liberty to disagree, but if you've studied Biology dealing with ecosystems, you'd know that when they become overpopulated, homosexuality (as well as violence and disease) increase in proportion as well as actual numbers.

As all these things help reduce populations to more sustainable levels, it seems an obvious conclusion. But if you have an alternate theory...

Hetrosexual activity guarentees the continuation of human species on this plant earth. Homosexuality and lesbian are just opposite of it. Both of them are in collision to the NATURAL SYSTEM OF EXISTANCE FOR HUMANS. Both of them do not produce and that is why both of them were put in the "CLOSET" for a long time. Many sextual deases are also attached to their "activity" which is harmful for human body. History and religion are against it. Satanic thoughts are the only ones to support the immorral activity of BOTH.

I suppose it would be either redundant or a waste of time to detail why "Satanic thoughts" as an explanation falls short of being a credible scientific argument.

There is no consensus among scientists about the exact reasons that an individual develops a heterosexual, bisexual, gay, or lesbian orientation. Although much research has examined the possible genetic, hormonal, developmental, social, and cultural influences on sexual orientation, no findings have emerged that permit scientists to conclude that sexual orientation is determined by any particular factor or factors. Many think that nature and nurture both play complex roles; most people experience little or no sense of choice about their sexual orientation.
http://www.apa.org/helpcenter/sexual-orientation.aspx