Chávez presided over a political epoch flush with money and lorded over a society riven by fear, deep political divisions, and ultraviolence. Consider the latest crime statistics from Observatorio Venezolano de la Violencia, which reckons that 2012 saw an astonishing 21,692 murders in the country—in a population of 29 million. Last year, I accompanied a Venezuelan journalist on his morning rounds at Caracas’s only morgue to count the previous night’s murders. As the number of dead ballooned, the Chávez regime simply stopped releasing murder statistics to the media.
All of this could have been predicted, and wasn’t particularly surprising from a president who believed that one must take the side of any enemy of the “empire.” That Zimbabwe’s dictator Robert Mugabe was a “freedom fighter,” or that Belarusian dictator Alexander Lukashenko presided over “a model of a social state.” Saddam Hussein was a “brother,” Bashar al-Assad had the “same political vision” as the Bolivarian revolutionaries in Venezuela. He saw in the madness of Col. Gaddafi an often overlooked “brilliance” (“I ask God to protect the life of our brother Muammar Gaddafi”). The brutal terrorist Carlos the Jackal, who praised the 9/11 attacks from his French jail cell, was “a good friend.” He praised and supported FARC, the terrorist organization operating in neighboring Colombia. The list is endless. 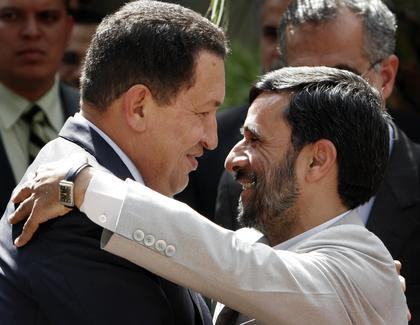 The Fascist regime of Iran declared a day of mourning over the death of their beloved friend Hugo Chavez. Bashar Assad took a break from killing his own people to express sorrow over losing an ally.