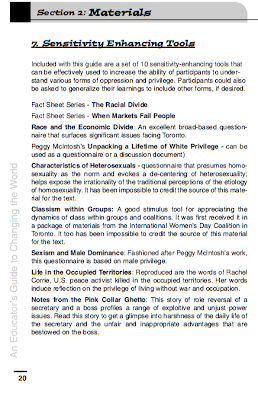 On page 1 of  An Educator's Guide for Changing the World: Methods, Models and Materials for Anti-Oppression and Social Justice Workshops, its author,  Ann Curry-Stevens thanks the City of Toronto's Access and Equity Department for its financial contribution to the completion of the guide.

That office of Toronto's municipal government is under the aegis of Uzma Shakir, who in a posting at the radical neo-Marxist website rabble.ca wrote that because of the Canadian government's stance on Israel, Muslim immigrants do not necessarily owe loyalty to Canada.

Hardly any surprise therefore that the guide, which is endorsed by the Toronto District School Board Professional Library as a curriculum document, lionizes the fanatical anti-Israeli, anti-American zealot Rachel Corrie, who died as a result of playing 'chicken' with an Israeli military bulldozer in 2003.

Acclaim for a faux "peace activist" who was a member of a group that endorses violence against Israel is only the rancid cherry sitting atop a septic sundae of bigotry, fanaticism and hate being promoted by the Toronto District School Board. 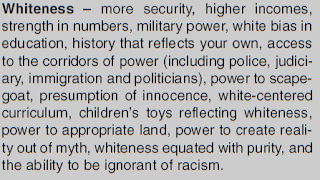 Included in the gems of Ms Stevens' opus is the vapid, racist doctrine that all white people are racist, with only white people being branded with that hateful stigmatization.

We are also treated to the traits of being male being described as having "an assumption of superiority" and "the power to abuse."

The middle class and heterosexuals also get to play villains in the TDSB's comical piece of hysteria, being characterized as oppressors "being able to define history through the expenditure of public money" with "freedom from police harassment" and the "presumption of sexual innocence." 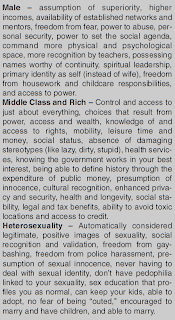 This sort of idiocy is typical of material promoted by the TDSB, but the City of Toronto financing such vile bigotry with tax dollars is reprehensible.

It's far past the time when the citizens of Toronto would benefit if the heads of the Toronto District School Board were removed.

And since the people at the top of the TDSB are clearly too idiotic to understand context, let me explain that in terms even someone as stupid as a Chief Academic Officer can understand, lest, like with blogger Blazing Cat Fur, the School Board send the police to my door.

By heads, I mean senior Administrative staff at headquarters. And by removed, I mean fired, not beheaded, as is done so often by those people that Rachel Corrie adored.

On the other hand...

UPDATE: Patrick Ross wrote a very insightful analysis of the systemic poison and the psychological and ideological corruption permeating the TDSB and its infusion into the curriculum. Please take the time to read his column at The Propagandist.
Posted by Richard K at 8:22 PM

Even in briefly skimming over this document it's already one of the most sinister things I've ever encountered. Now to read it in detail. I imagine I'll be quite mortified.

I fully expect the TDSB to dispatch TPS to SWAT your domicile with an excavator in the hopes that you will become a future far right-wing saint known as "St. Eye Crazy" for insinuating such hate facts.

Cut me head off if I'm off the mark.

Oh, and happy St. Pancake day...or is it crepe de Corrie jour? I just can't keep all the activist BS hijacking of religious necessity up to date on my calendar these days.