Radical Education: The University of Toronto's promotion of 9-11 conspiracy theories and sympathy for Taliban terrorists

"Critical Thinking" as a term suggests the ability to objectively analyze and critique data. But as a methodology taught at the University of Toronto's Ontario Institute for Studies in Education (OISE)  it takes on an entirely different, sinister meaning worthy of a creation of the Ministry of Truth from George Orwell's 1984.

Turning logic on its head, the Marxist-influenced faculty teaches that Critical Thinking means to assume that American foreign policy is always in the wrong, that Western mainstream media is deceptive for the purpose of serving the government, that history is taught to further the aims of an oppressive patriarchy, and that the public, with the exception of those who are taught OISE's brand of Critical Thinking, are a mass of brainwashed dupes.

In other words, at the University of Toronto's cultish ideological incubator for pedagogy throughout Canada, a "Critical Thinker" is someone who uncritically thinks exactly what they are told to at OISE.

That practice takes on an appalling twist at OISE's Centre for Media and Culture in Education. With the pretext of teaching "Critical Media Literacy" OISE is attempting to cast doubt that the September 11, 2001 attacks on New York and Washington were perpetrated by Muslim terrorists and that the Taliban was actually sheltering the al Qaida terror organization.

The word "allegedly" is something media must use when reporting on a crime before the courts that has not been proven. Its use in other contexts is generally for the purpose of casting doubt on the veracity of a report.  That word makes a number of appearances in OISE's Critical Media Literacy in Times of War lesson.

All these terms, in the lesson, are not-so-subtle suggestions that the allegations of lunatic 9-11 conspiracy theorists are correct. Those being that the 9-11 attacks were planned by people inside the US government, and Zionists as a pretext for war.

Rather than being an educational institute, OISE is a centre of indoctrination. How else to describe a school that promotes and encourages Marxism,  an ideology that inevitably results in totalitarianism and has led to decades of repression and tens of millions of political murders? 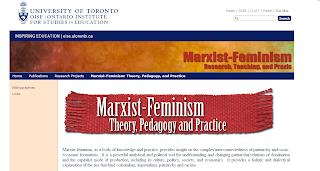 This sort of sympathy for the Taliban is common at U of T's OISE. One of the Marxist professors at the Institution that produces people who devise school curricula throughout Canada recently produced a paper that attributed the cause of women's oppression in Afghanistan not to the Taliban or the harsh form of Islam it represents, but to a conspiracy among western governments, corporations and NGO's.

OISE's professors are academics of the most anti-intellectual kind. They are a type, to use a description provided by Emma Teitel in Macleans,  who speak "another language, a jargon you might misconstrue as scientific–only the words they (use aren't) shortcuts meant to simplify or summarize complex concepts, they (are) used to make simple concepts sound complex: Hegemonic, racialized, problematic, intersectionality... "

Toronto blogger Blazing Cat Fur received a visit from the police last week because he sarcastically mused OISE needs to be purged or burnt to the ground, whichever is more effective.

I have another idea. The spoiled, overpaid, dense OISE staff who are so sympathetic to the Taliban should be sent to live with those fanatics for a year. That dose of living outside their self-indulgent academic bubble might not do them so much good, but it would certainly benefit the students they would otherwise poison for that year.
Posted by Richard K at 12:19 PM

Before long Iranian government agents Anthony Michael Hall and Joshua Blakeney will be added to the list of activists invited to speak at Toronto schools.

Blakeney works for Iran's English language propaganda service, Press TV, which de facto makes him working for the Islamic Republic. As far as I know Hall, Blakeney's mentor and Sith Lord, so-to-speak, is not in the pay of Iran - he promotes nutty ideas that happen to benefit Iran because he actually believes them.

Oh I am well aware of Blakeney and Hall and the lies the spread on press TV about Canada.

Farmer Ted is an agent of the Iranian government???