As this blog has already noted, Alternatives International is a fanatical, Marxist influenced organization that gets over a million dollars a year from Canadian taxpayers. Among its "allies" are the anti-Semitic Canadian Arab Federation, the Young Communist League of Cuba, and the violent, anti-capitalist group, Ontario Coalition Against Poverty. It was the conduit of funds for the Sea Hitler boat that tried to break Israel's blockade to prevent arm smuggling to Gaza. The organization sells "Stop Harper" T Shirts. And it is a registered charity.

Hopefully, now that the Canadian International Development Agency is being brought under the aegis of the Department of Foreign Affairs, someone in government will take notice of what that despicable organization is doing and cut off its funding and charitable status.

The sooner the better. 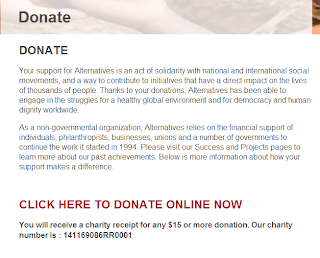 Do like Forest Ethics and make it an advocacy, then you wont be under the targets of charities